Sometimes I hit the jackpot in my quest to find old material about retirement and early retirement. Last week, for instance, I was reading Early Retirement Dude’s history of the financial independence movement when he mentioned a Life magazine photo essay about early retirement from February 1957. Say what?

Within minutes, I was reading the article via Google Books. Within an hour, I had ordered not just that issue of Life but three others with retirement articles. Within days, the magazines were on my doorstep. I’m telling you: We live in the future!

I had intended to scan the entire ten-page photo essay for you, but that proved impossible. My scanner only handles 8-1/2 x 11 paper. (What about legal size?) I took the magazines down to the nearest copy shop, but their scanner can’t handle Life magazines either. (They’re roughly 11 x 14!) So, I’ve opted to transcribe the bulk of the text for you, and I’ve included a few photos from the Google archive of this article.

Note: I hate Lifes copy editing. I’ve taken the liberty of formatting things to match my personal sensibility. Long live the Oxford comma! And paragraph breaks. Also, you should be able to click on any of these images to view a larger version.

To many young men, retirement is a goal they cannot hope to reach until they are too used up to enjoy it. To many aging work horses, it is a prospect of boredom bred of too much spare time. Between the two extremes, a few men in their 40s and 50s are pushing into a new frontier of retirement retreat from punishing jobs to a life where they still work but no longer under high pressure.

He remodeled a house, built five rentable apartments, tennis courts, and a swimming pool and settled into the family life he wanted to lead, teaching youngsters how to swim and play tennis and improving his property. He had special qualifications that pulled him past the critical point where many who try retirement give up and return to the beaten track. He was an expert do-it-yourselfer and a qualified athletic instructor.

Still, he found decompression from high-pressure life hard to take. I’d be plastering one of the apartments, he says, and I’d suddenly think that I ought to be on my way somewhere. 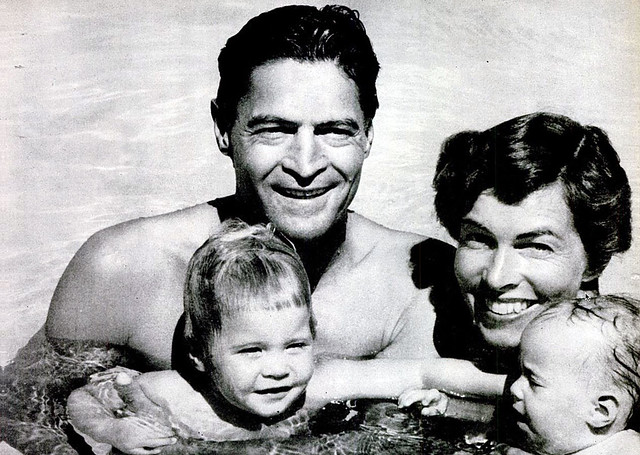 As you read these anecdotes, keep in mind they’re from February 1957. A young adult reading this might have been born in 1930 or 1935. They would have reached traditional retirement age in 1995 or 2000, and they’d likely be nearing ninety now (if they’re fortunate enough to still be alive).

To put it another way: Warren Buffett was born in 1930. He would have been 26 years old when this issue was published. Odds are good that he read it. Odds are also good that he thought, Man, I’d like to retire early!

A romantic retreat to part-time jobs

Arthur and Kathryn Lynch had romantic ideas about retirement: They wanted to get away from it all. They also had advantages $30,000 [$274,000 today], no children, and technical knowledge picked up on jobs as research chemists.

Both Lynches like manual labor and hire themselves out as handymen. Working part time in a place they love, they net a livable $4000 a year [$36,500 today]. 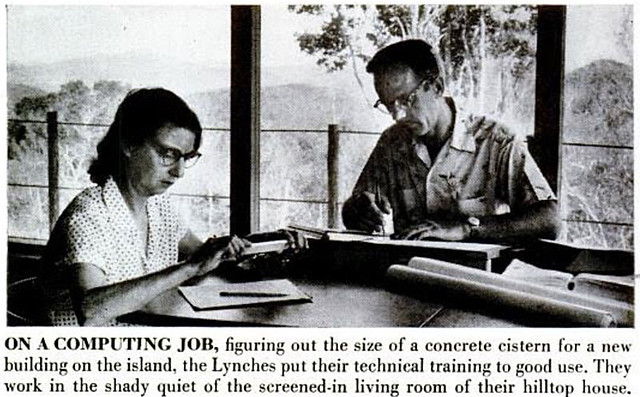 This guy is a little more prepared than the first fellow. He at least has two times his annual salary saved even if he put a big chunk of that into a house. And what about his wife? If she’s a research chemist too, how much does she make? If this article were written today, we’d get stats on both partners in this marriage.

Aside from the subtle sexism, I feel like these stories could have been written today. When I think about the folks I know who are pursuing early retirement, their lives and thoughts and passions look very similar to those profiled in this piece.

I know people who want to retire early so that they can move to some remote country for a romantic retreat. I know folks who want to escape high-pressure jobs in order to pursue something more prosaic. Like the Wertzes (in the excerpt below), Bob Clyatt retired early to focus on art.

People want to retire early for a variety of reasons. But our reasons today look an awful lot like the reasons people had in 1957.

Getting free to lead a very busy life

In 1948, Joseph B. Wertz, a 45-year-old Washington designer under contract with the government to lay out airbase plans, had reached a high-pressure level of success where he had no time for hobbies and too little time for his newly-married wife, Jeanne.

So, he gave up his busy life for a life of retirement which has turned out to be every bit as busy. Today, in a made-over stable in New Mexico, he makes pottery and furniture, paints, sculpts, photographs, and does silversmithing.

After deciding to retire, the Wertzes scouted the western U.S. in a trailer, looking for the ideal spot for settling down. Facing the river in Santa Fe, they bought a stable and rebuilt it into a rambling adobe house. They live there comfortably on the $4200 annual income from investments [$38,000 today].

Some of the pottery Mr. Wertz makes is so good museums are interested in showing it. Meanwhile, he has a new interest glass blowing. 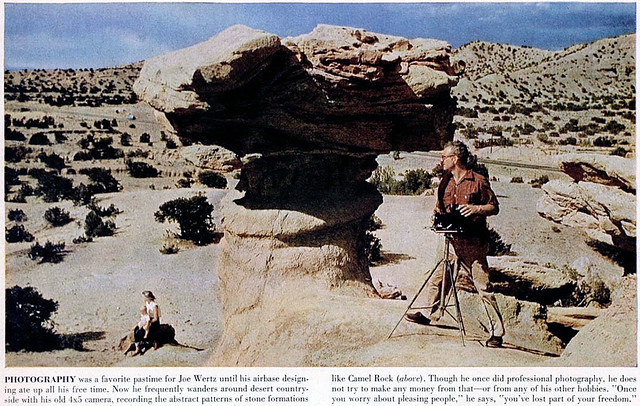 Having discovered this article and the three other Life magazines with retirement topics I’m now forced to wonder: How many other old articles are out there about early retirement?

In college, I loved working on research papers. I loved going to the library, digging out the catalogs of various magazines and journals (some of which were on microfilm), then tracking down the back issues. This project feels like it calls for similar legwork. As awesome as the internet is, it’s woefully lacking when it comes to pre-1990 material. Like the U.S. as a whole, the web has a strong recency bias.

Do universities still keep huge volumes that index back issues of journals and magazines? I don’t know. But I think it would be fun to take a day to go visit a college library to try to do some research on this subject.

Finding time to be a father

Allen Cook was an airline pilot whose overseas flights kept him too long from his family. He muffed two tries at retirement. Once, he moved to Florida but got cold feet when the monthly pay check was cut off abruptly. Another time, he tried dairy farming in California and wearied of the long milking chores.

Such troubles are common to people who try to retire. But Cook kept trying.

In 1954, he sold his farm and livestock and bought a motel in Sarasota, Fla. for use as a business and as a residence. Soon, he was able to sell the motel at a profit, buy a house, and devote himself to a business he liked a camera shop in which he had invested.

Now 39, he works at the shop full-time during the tourist season but, with a manager to spell him, only half-time the rest of the year. He takes $100 a week [$913 today] out of the till for the family’s living expenses and can afford to do what he prizes most: be a full-time father. 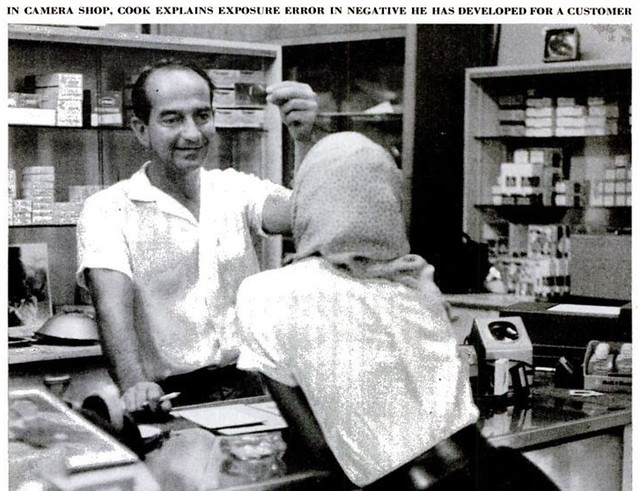 I love that the folks at Life had no qualms talking about these men being retired even though they still worked. Nowadays, there’s a lot of push-back when somebody says she’s retired yet continues to earn money from her labor.

We bloggers jokingly talk about the Internet Retirement Police who roam the web calling out folks who don’t meet their definition of retirement. I wonder if there were Magazine Retirement Police in 1957, folks who complained that the subjects of this article weren’t actually retired.

I suspect not. From my reading, this is a new complaint in the past twenty years. Previous generations had no qualm with folks claiming to be both retired and working.

Business tied to pleasure, plus the risks

For those who retire young, it is often hard to know which part is vocation and which avocation.

With two of us, says Olin, neither knocks his brains out. And we can do business on a beach as well as an office.

Edward Dobson, 52, quit a lucrative 15-hour-a-day law and real estate business in Washingtonville, N.Y. and moved to Sarasota. He now dabbles in real estate and two palm tree nurseries and lives on $6000 a year [$55,000 today].

The scarcity of people who achieve this state of relaxed living indicates the hazards. Capital is needed to start and a period of hard labor and discouragement must be faced. Favored regions are flooded with others trying to retire. While one member of the family may adjust to the new life, others may not. Many people are stimulated by their work, feel dismally let down when they give it up. And some, in trading money for time, simply change pressures.

But if it works, early retirement can produce the blissful by-product show [in these pages].

As a word of warning, look for more of these history of retirement pieces in the future. I’ve ordered six or seven old books on the subject, and am now keeping my eye out for more magazine articles about the topic too.